I was so excited when Sarge told me about the doggie-swap happening over at Wyldechild's blog.  I just thought it was such a great idea!  And then I was even more excited when I found out that I had been paired up with Sarge - I mean, did you check out his video for the peeps-on-parade winner?!?  This doggie is pretty awesome, which I am sure you all know already!

I took Finnie shopping so we could create a great care package.  I figured it's time to make Finn as much of a pro at shopping as I am, so I let her tell me which things Sarge would like best... 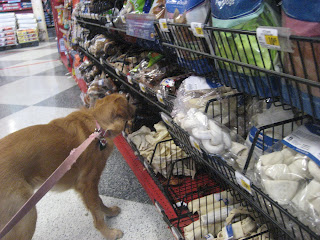 It's actually kind of funny, because there was obedience training happening at the same time at the other end of the store, and I am walking around with Finn taking pictures of her sniffing out the good stuff!  I think the dogs-in-training were a little jealous.
And then I felt some guilt when a salesperson told me that it must be hard to say no to Finnie, given how cute she is and all.  (*Sigh*, it's a tough life for Finn)  I mean, I couldn't take her shopping for another doggie without letting her pick up some stuff for herself, right?  So, I wound up buying some new things for her too - - 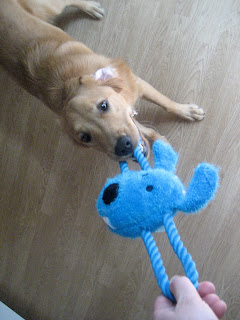 And now we're off to drop the swap-box in the mail and enjoy another glorious spring Saturday here!  Have a great weekend!
Posted by Finn at 10:48 AM