I wanted to let you know how Finn was doing with her separation anxiety.  I had posted about some several failed attempts here.  She was munching on our poor little carpet, and throughout the summer, the state of our carpet had gotten worse and worse.  Several people had told us to crate her, since she hadn't really been punished in her crate, and from time to time she wanders in there.  But leaving her home alone in the crate for upwards of 8 hours a day just didn't seem fair, in our eyes.  Throughout the summer, Finn would have some good days, where she didn't touch anything, and then some bad days, where she actually starting munching on our molding!  We went and bought some sour apple spray to deter her from this and it was just diluted rubbing alcohol.  I could smell it when I even just sprayed it.  No wonder why Finn stopped munching on it. 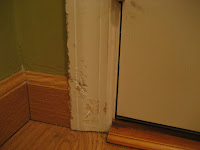 Then, we went away for a couple of weeks and left her with the dog sitter.  Before we brought her home, I bought this pink bin to keep all of her toys in.  Either at night or first thing in the morning, I pick up all of her toys and put them back in there.  I told myself it was because I wanted her to know where everything was, but really I was tired of stepping on the random pig's foot while I was barefoot! 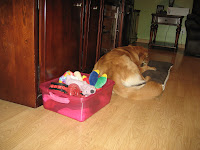 It's been a couple of weeks now, and I thought for sure she would have taken a crack at the plastic bin, since it's new and colorful and crunchy, but she hasn't.

I can't separate her behavior from my imagination, but I think she kind of grew up while we were away.  We've left her for a nice chunk of time several times now since we've been back, and she seems to be doing fine!  When we return, she's been sleeping or playing.

We still use that spider web toy, I put it down before we leave and I pick it up the instant I walk through the door.  The funny thing is that she never ever ever plays with it, even though it's awesome and rubbery and sqeaky!  It's always in the same spot where I put it down.  So I think she knows it's not really a toy but just something that signals this "we're coming back" idea. 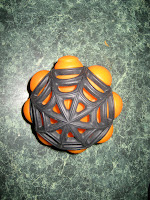 So...maybe she just learned we are coming back.  And I try my hardest not to make a big deal for a few minutes before and a few minutes after I leave and come back.  Could it be...she's *gulp* maturing???  Could it be...that I am getting less anxious about leaving her and she senses that it's ok to be alone?

Either way, that molding by the door is getting replaced this weekend, and we're hoping to put down the new carpet within a month!

We'll either be going a walk somewhere new this morning or taking Finn back to the very beautiful Prosser Pines, and we'll let you know how that goes!
Posted by Finn at 11:40 AM