Hewwwow!  Finn here.  One day, Momma and Pops were going about their regular going-to-work routine, and I heard a big truck pull up.  They had ordered a new fence for the back yard, and the company had a cancellation that day, and guess what?  We were getting that fence that day.

Momma said it's funny how things work, because on that same day, her commuter train line into the concrete jungle was suspended.

A train hit a car and killed a man earlier in the morning.  Trains were cancelled on her line until 3PM that day and delayed on the other lines around us.

So she got to work from home while the fence guys put up our new fence.

After my initial investigation, I decided it would be best if I just laid down and let Momma take some pictures and I would wait until it was all over.

There was a lot of grinding and banging and I didn't take so well to that.  I was sure glad Momma was home that day!

Gates!  In with the new! 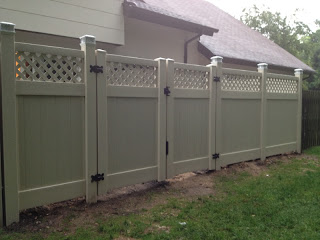 Remember to start snapping away for your Olympic pictures!  Your Closing Ceremony pics can be sent to marianne(dot)d(dot)howard(at)gmail(dot)com.  You can start sending them July 9th!

And head on over to George and Tess' and watch me join them today for their steps!